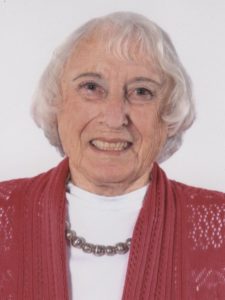 …
Shirley Merrill Himmler-Koppelman, passed away February 25, 2017 at her home in El Segundo, California. She was 94 years old.
Shirley was born November 2, 1922 in Grand Rapids Michigan to Carl William Himmler and Winifred Loretta Jane Merrill-Himmler. Many of her early years were spent in the care of her grandparents, Frank Aaron and Mary Merrill of Grand Rapids; and her aunt and uncle Josephine and Sylvester Granger of Grand Ledge Michigan.
She attended high school at Marywood Academy in Grand Rapids, Michigan, and graduated in 1940. She earned her Registered Nurse Diploma in 1943 at Mercy Central School of Nursing.
She served in the United States Army Nurse Corps from 1944 to 1947, and rose to the rank of First Lieutenant. Following her honorable discharge from the Army, she earned a Bachelor of Science in Public Health Nursing in 1951 at Catholic University of America in Washington D.C.
She was a devoted mother, who enjoyed traveling, and was an active member of St. Anthony’s Church for over 50 years.
Shirley is preceded in death by her parents, Winifred Merrill and Carl Himmler; and her half – sister, Marilyn Himmler-Rogers. She is survived by her children Marie (James) Kitchen of Bend Oregon, Paul (Susan) Koppelman of El Segundo, Annie Ellison of Redmond Oregon, John (Ema) Koppelman of Del Aire, California, and Carl Koppelman of El Segundo, her grandchildren Steven Koppelman, Jackson Koppelman, Hailey Koppelman, Nicole Cicciarelli, Jonathan Kitchen, and Matthew Kitchen; great grandchildren Katelyn, Aaliyah, Alexandra, and Annabelle; and her cousins George W. Granger of Bakersfield, and Sylvester “Bob” Granger, of Georgetown Texas.