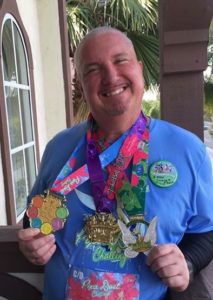 Timothy John Francuz, beloved husband and father, entered eternal life on July 13, 2017. He gained his wings peacefully at home, surrounded by his family, following a 19 month battle with brain cancer.
Tim graduated from Pater Noster High School in 1984. Following graduation, he served in the United States Army for four years. Upon honorable discharge, he went on to work in several technical and management positions, but felt called to serve others through healthcare. Tim graduated from the Harbor UCLA Medical Center School of Radiologic Technology in 2003, and immediately began his employment at UCLA Harbor Hospital as a Radiologic Technologist. He was promoted to special procedures technologist, and continued his employment, even returning to work following his first brain surgery. He loved his Harbor Hospital family, and enjoyed helping his patients and coworkers, always bringing a smile to those he encountered.  Tim was also an active member of the Fitbit community. He would wake an hour earlier each day to take time to send out motivating and inspiring messages with the hopes he would encourage others who were trying to improve their health and well-being. As long as his health permitted, he would walk or run every day, pushing himself to the limit. With every step, he wore a smile on his face, determined the make the best of every day he had. Through his unwavering dedication, Tim completed the Los Angeles Marathon in 2015. Even following brain surgery, and while on aggressive chemotherapy, he continued to train, completing four additional half marathons in addition to many five and ten K races. Tim enjoyed music and was a member of the Saint Monica Catholic Church Choir for many years. He was never more thrilled than when he visited the happiest place on earth. Tim’s affection for Disneyland was apparent every time he proudly spoke of his grandfather, who helped build the park, and was even photographed with Walt Disney himself during their work on the Jungle Cruise ride. Disneyland also allowed Tim to showcase his love for his country. He could often be found at the Disneyland Flag retreat ceremony most evenings, standing tall representing the US Army. His service to his country went above the call of duty when Tim became a member of the American Legion, devoting time to help veterans and the community.
Tim touched many lives, and left a legacy to teach all of us to fight the fight with dignity, do our best to be positive and thankful, to support others and laugh each day; all while loving family to the fullest. Tim persevered no matter how steep the hills or how far away the finish line seemed to be. In this world full of tribulations, Tim showed us that God is in control, but you can still live your life to the fullest, fulfilling all Jesus has empowered you to do, just as Tim did. He was truly an inspiration.
Timothy is survived by his devoted wife, Christy Manos and their loving children, Timothy and Annie; as well as his daughter Krystian Nicholson. He also leaves behind his aunt, Margaret Leary, and siblings Louis, Danny, Cathy, Susie, David, Joseph, and Christine.
Timothy is a beautiful, generous, funny, caring soul and he will be greatly missed beyond measure.