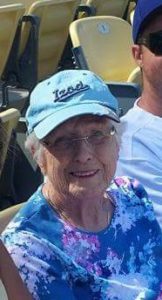 Janet Ann Cunningham Mason, 92, of Los Angeles passed away October 18 th , 2017 after a short hospitalization at Marina Del Rey Hospital, in Marina Del Rey California. She was visited by her family and friends and listened to one last Dodger game.

Janet was born July 18 th , 1925 in Pennsylvania having one sister, Louise. She graduated from Avalon High School where she stomped the grounds and twirled baton as a Majorette. Childhood friends and sweethearts ”Jan” and “Ray” were married in 1946, they would spend the next 63 years together. (Raymond Stewart Mason preceded in death, 2009).

They raised their 3 children in Pennsylvania and in 1970 the family headed West to California where they settled in the Los Angeles area. Here Jan had a career working for a few different major corporations until she retired, still keeping up with a busy schdule. Janet and Ray were longtime members of Westchester United Methodist Church, where Jan volunteered, she was also a member of
P.E.O. Jan enjoyed traveling, gardening, and was a baker of delicious treats.

A Remembrance and Celebration of Life Ceremony will be held on Saturday November 4 th , 2017 at Westchester United Methodist Church at 11:00 A.M. Reception immediately to follow.